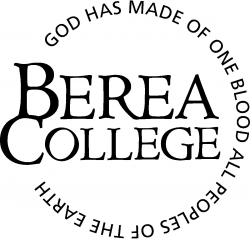 Berea College achieved national distinction as the first coeducational and interracial college in the South. With an emphasis on service to the people of Appalachia and beyond, Berea enrolls 1,600 students from 40 states and 60 countries.  The College has a longstanding commitment to interracial education; here, people of different races seek to learn from and about each other, while also living together. Berea is among the most racially diverse private liberal arts colleges in the United States. The college admits only students whose families are unable to afford the high cost of tuition and awards each of them a four-year tuition scholarship.  Berea’s students excel in the College’s supportive but demanding academic environment, and many are the first in their families to graduate from college.  The College is one of seven federally recognized Work Colleges, and all students hold a labor position in which they work 10-12 hours per week in all areas of the College.  Graduates distinguish themselves in a variety of fields, including social service, government, ministry, the arts, business, education, medicine, and science, and many go on to earn graduate degrees.

Located where the Bluegrass Region meets the Cumberland Mountains, the town of Berea (pop. 14,000) lies forty miles south of Lexington and is approximately two hours from Cincinnati, Louisville, and Knoxville.

Email me jobs from Berea College