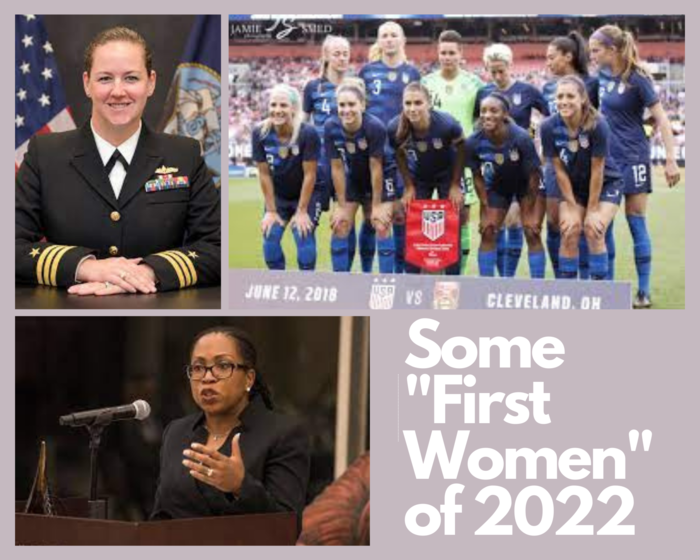 While many know the First Lady of the United States is Dr. Jill Biden, other women this year have attained eminence through grit, perseverance, and passion as well. For instance, Kamala Devi Harris is the first female vice president and the highest-ranking female official in U.S. history. She is also the first African-American and first Asian-American to serve in the role. Prior to becoming the Vice President, she was the Attorney General of the State of California.

Another "First Woman," though, is an all-woman team. And then there is a candidate as a Supreme Court Justice, while a third is commander of the oldest commissioned naval vessel in the United States.

In March 2016, five players of the US Women's Soccer Team filed a complaint with the federation that manages men's and womens' competitions. The group cited U.S. Soccer federation financial reports as proof that they had become the federation’s main economic engine. However, they often earned only half as much — or less — than their male counterparts.

“The numbers speak for themselves,” said goalkeeper Hope Solo, one of the players who had signed the complaint. Solo said the men’s players “get paid more to just show up than we get paid to win major championships.” Co-captains Carli Lloyd and Becky Sauerbrunn, forward Alex Morgan and midfielder Megan Rapinoe joined in the complaint.

Exactly four years later, in March 2020, the federation was still fighting the complaint. US Soccer filed in court an argument that “indisputable science” proved that the players on its World Cup-winning women’s national team were inferior to men.

Finally, in March 2022, the two sides settled the dispute. The settlement includesS. Soccer includes $24 million in compensation for the athletes. The package, however, is largely back pay for dozens of players who were included once the plaintiffs were granted class-action status. The award also included several million dollars in seed money for a fund that will be available to players for post-career plans and initiatives to grow the women’s game.

The strength and fortitude of Women's Soccer will prove to be an incredible inspiration for girls and women of all ages who choose not to let male-dominated systems belittle their achievements.

Judge Jackson is the first African-American woman to ever be nominated by a sitting President. She was one of President Biden’s first judicial nominees, in February 2022. Bipartisan support in 2021 had already propelled her to  the U.S. Court of Appeals for the D.C. Circuit.

Previous to that, President Obama had nominated Judge Jackson to be a district court judge for the U.S. District Court for the District of Columbia in 2012, and confirmed in 2013 — again, with bipartisan support.

Prior to serving as a judge, Judge Jackson followed in the footsteps of her mentor Justice Stephen Breyer by working in the U.S. Sentencing Commission. Her work there focused on reducing unwarranted sentencing disparities and ensuring that federal sentences were just and proportionate.

As a federal public defender, she represented defendants who did not have the means to pay for a lawyer.

With multiple law enforcement officials in her family, she also has a personal understanding of the stakes of the legal system. Jackson’s brother served as a police officer in Baltimore after serving in the U.S. Army and being deployed to Iraq and Egypt. Two of her uncles were police officers in Miami.

Back to the Future: First Female Captain of Old Ironsides

The USS Constitution, also known as Old Ironsides for the fabled way cannonballs used to bounce off its sides, is the Navy's oldest commissioned ship still in operation today. For 224 years, the Constitution was commanded by men. It's moored in Charleston, Massacussetts, next to Boston (WBUR)

Cmdr. Billie J. Farrell took command of Old Ironsides and its 80 crew members in March 2020. She's 39 years old, originally from Kentucky. She had already been a commissioned Navy officer for nearly 18 years. "I'm a surface warfare officer by trade in the Navy," she said. So all my career has been on ships, but they've all been on guided missile cruisers. So dealing with agents, weapons systems and modern technology. ... I've done multiple deployments on those guided missile cruisers."

She explained, "I really was just drawn into the opportunity and the chance to be a part of history, which is the entire ship. It's, you know, this moment, but it's also the 224 years that this ship has represented the Navy and the country. It's been here through the founding — you know, it was ordered under President George Washington, commissioned under President John Adams"

The position is not just ceremonial. The crew has to address the challenges that come with a ship that is 224 years old. Also, they constantly drill. "We do sail training where they actually climb the mast and learn how to rig the sails. We do gun drills and all the things that would have happened 224 years ago."

She delights in her new position. She said, "I think there was a tour group a few weeks ago where I was talking to some children and one of them said, 'No, it's [the ship is] a replica.' I said, 'No, it's not. This is the actual ship.'"

Read our article, "12 Women Disrupting History," to read how other women are rewriting history.